Warning: this article will contain show spoilers so stop now if you care!

The internet is practically exploding due to the new Broadway musical “Hamilton” which cleverly mixes hip-hop music with the American Revolution, written by the same guy who wrote “In the Heights”, Lin-Manuel Miranda. The show sounds great so when Meghana and I went to New York City we tried to see it. We failed. The show is sold out until September 2016 and the lottery crowd was getting so intense that they had to move it online and it crashed. So.

We ended up at Spring Awakening, and thank goodness we did because it is an amazing show and probably deserves to be talked about more than it is.

A little background, “Spring Awakening” takes place in 1891 Germany and is about teenagers who are so damn repressed by their society that they are jumping out of their skins. It first opened on Broadway in 2006 and I remember theatre kids in school gossiping about it as “that show with sex on stage” . The music is in the style of ROCK and the staging is experimental and minimal, integrating instruments into the performance. 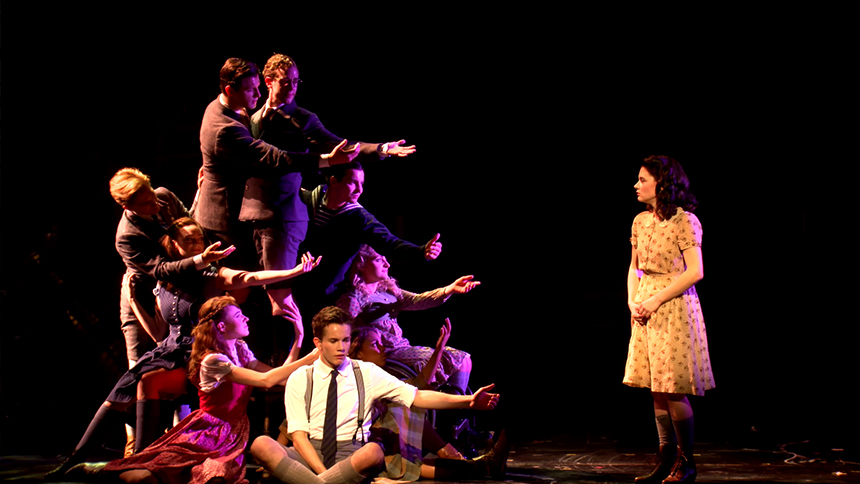 The 2015 revival is all that and more. The first thing that makes this great is the way sign language was integrated into the plot of the story. This variety article  covers more of that than I can. I read about it in the playbill and it was so subtle I probably wouldn’t have picked it up if I hadn’t, but it’s very clever and points out deaf history that most hearing people are not familiar with.

The integration of ASL into the performance was flawless.  All the actors signed, and for the leads who were deaf, there were hearing actors who sang and spoke their lyrics. The play went further with these “voices” and made them sort of consciousnesses for the main characters; people they would look to when in crisis, people watching from the sidelines.

Not only does this show have deaf actors, but it has a deaf black actress (Treshelle Edmond) and Ali Stoker, who is the first actress on Broadway in a wheelchair (and was also killer on “the Glee Project”). And Marlee Matlin! And Camryn Manheim!

The show is basically about poor sex ed and the consequences of keeping kids in the dark, which is SO RELATABLE to today. The first scene of the movie is Wendla being lied to about where babies come from, which results in some pretty uninformed decision making.

It’s good to point out the importance of having access to contraception, accurate information, and safe abortions in a world where people bring guns to women’s health clinics. Watching a young girl get dragged by her mother to someone’s basement to ultimately die because of an abortion gone wrong will certainly drive home the point. The show also tackles depression, domestic abuse, and academic pressure, somehow all with grace.

Finally, the gays get to be happy! Lead actress dies, the lead guy gets sent to reform school, the other main guy kills himself, and no one actually learns about sex (though there is some indication that times are changing in the closing number “Purple Summer”)

However, and this is a big however, the gays survive! Hanschen, an overly-sexual teen whose every line (and sign) is filled with innuendo, pursues Ernst, a fellow classmate. In the first act, he mostly just jokes about it, but in the second act they get a hilarious and adorable scene on the top of a piano where they sing to each other and kiss! And they are both happy about it and talk about a future together. Neither of them die, which is more than most gay couples can say in most plays and films and books and musicals.

So if you can, go see this show! Tickets are fairly cheap and it’s only on for three more weeks.